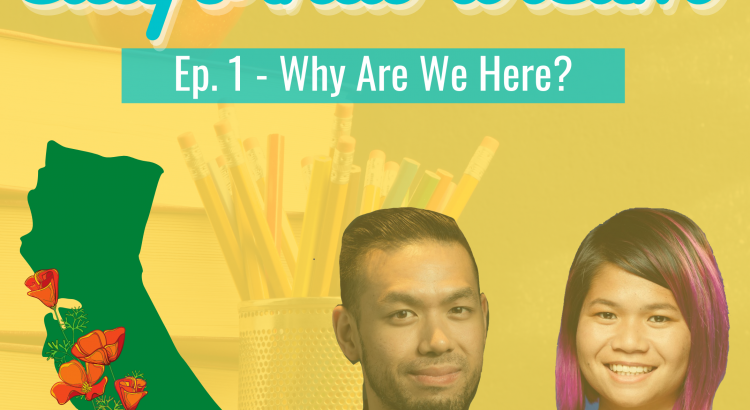 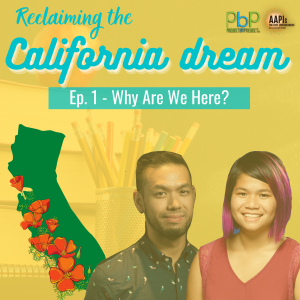 Reclaiming the California Dream is a limited podcast series featuring amazing stories from deeply rooted California community members and what their community means to them. By working together to pass the Schools and Communities First Act, we can sustain our culture, provide stability for our families and build a future where all Californians have access to quality health care and education we deserve.

Reclaiming the California Dream is brought to you by AAPIs for Civic Empowerment Education Fund (https://aapiforce-ef.org) and Project by Project San Francisco (https://projectbyproject.org).

An introduction by Raymond Luu, National Program Manager for Project by Project SF and Lan Nguyen, Communications Manager for AAPIs for Civic Empowerment. They talk about how this show came to be, what to know about Schools and Communities First, and why it’s important to be an empowered voter for the upcoming election. Brought to you by Project by Project San Francisco & AAPIs for Civic Empowerment Education Fund. Produced by Raymond Luu. Music: https://www.bensound.com

Welcome everyone to the… Aw I already messed up. Welcome everyone to the Reclaiming the California Dream podcast series. I wanted to introduce you to the organizations that made this show possible. We have Lan Nguyen with AAPI FORCE and I’m Raymond Luu from Project by Project. So Lan, if you want to start by introducing yourself and the organization.

Yeah, for sure. Thank you so much for having me. My name is Lan. I use she/her pronouns and I am the communications manager at AAPI FORCE; that stands for AAPIs for Civc Empowerment. And we are a statewide organization that seeks to build working class Asian American and Pacific Islander political power across California. We advocate for progressive issues and empower working class AAPI communities to be civically engaged. And with the upcoming election this November, we are making sure that folks are not only voting for who is going to be our next president of the United States, but making sure that folks are going to be involved in voting down the ballot, voting for initiatives that are going to impact communities every day in the state of California. And some of these issues include Prop 15, which is what this podcast is about. As well as affirmative action.

We also have some criminal justice issues on the ballot. So there’s a lot of things at stake, this election for folks to really vote towards change in our community. So we want to make sure that folks are civically engaged and also encouraging folks to take the leap and join us in our movement. And really, to me, it’s the goal isn’t necessarily to persuade people, to join my side or to believe in the same things I believe in, but to empower people, to give them the opportunity, to learn more about the issue on their own, you know, like some of these folks may not have voted down the ballot. They may have stopped at the top or maybe they would have sat out the election. So I think really the key thing that I get out of these conversations is empowering people to make their own decisions and also building relationships too is so meaningful.

Cool. Again, Lan, glad to have you on here again, part of this project. So I’m Raymond Luu, again, as I mentioned at the start, I’m a national program manager for Project by Project and the producer of the show. Our organization has been around since 1998, and we currently operate out of three chapters, New York, Los Angeles, San Francisco, and I’m based here in SF. So every year PbP champions, a different theme and each chapter with their local nonprofit organization that specializes in that theme. And in tackling that issue, we empower our steering committee members to support our beneficiary partners by ways like fundraising, community outreach, volunteer mobilization, and it’s through this work. And we also focus our efforts on internal leadership development, really by giving our members opportunities to flex their knowledge and skills, to create initiatives that help their communities and networks, and also the organization, our organization.

We also host an annual tasting benefit called Plate by Plate in each city. Not sure if any of you happen to go to one, but basically the, the event features some of our best and local restaurant and beverage binders for all of our attendees to enjoy. The money that we raise, go to support our beneficiary partners and the amazing work that they do for the community. So this year we’re focusing on civic and political engagement. Don’t really have to say much in terms of why that’s important this year, but we also try to frame it as voter empowerment. You know we really want to try to educate our members and their networks on where to find resources, to ensure they’re equipped with the proper information so they can make an educated decision at the ballot box.

Asian Americans and Pacific Islanders are the racial group that is least likely to be contacted about the elections out of all the racial groups. So we are hoping to change that. So I hope that folks who are listening will consider joining us in our movement to contact voters.

And so why we started the show I met Lan in one of the workshops that AAPI FORCE was hosting and one of their initiatives in terms of trying to educate people of what Schools and Communities First/Prop 15 was, is really telling the stories and highlighting stories of folks who are part of the community key players in the community key community members. And we’re talking teachers, students park workers, public workers, pretty much anyone in your neighborhood that you can think of where we wanted to encapsulate the feel of why their community was so important and necessarily more importantly, why resources going into those communities are super important. And so I came to Lan to say, Hey, you know, why don’t we basically tell stories in an audio format and create like this limited podcast series where we interview people, capture their stories, really capture the feel of why their community is important to them.

We are so grateful that we have come to know you and have you in our community of volunteers and our community of AAPI FORCE members. And it was just such a wonderful gift of you to produce this podcast for us. And I think it’s going to be, it’s going to do a lot of good. It’s not just going to be put out there for folks to listen to and learn more about Schools and Communities First. But I also think that it allowed us to form connections with the folks who are interviewed. I think a lot of the folks who were interviewed didn’t know about Prop 15 and, you know, we reach out to them. We tell them a little bit about prop 15 and just ask them to tell their story. And in telling their story, they’re making these connections of like, you know, like I went through these experiences, these are the challenges that I have, and this is how it …

It connects to Prop 15. So they’re making those connections on their own, through their own storytelling. And I think that’s what organizing is. Organizing isn’t about telling people what to think or what to do, but having, like helping people and encouraging people to reflect on their own experiences and make their own political decisions. I don’t think the conversations that we had were too different from the conversations that I’ve had in phone bank sessions, obviously phone making sessions are a lot shorter, but I would say that they’re really similar. And it’s just about connecting with people and getting to know their stories. Yeah.

Then since we’ve been talking about it, can you just kind of briefly describe what Schools and Communities first Act is, or proposition 15, basically the summary of it.

Yes. Schools and CommunitiesFirst, also known as Prop 15 is going to be on the November ballot. It is a California statewide initiative that aims to bring back $12 billion to our schools and community programs by closing a property tax loophole for corporations. So due to proposition 13, that was passed in 1978 homeowners as well as corporations benefited from this proposition that basically capped property taxes. And as a result of that, our schools and our community programs that rely on tax dollars have been severely underfunded. So Prop 15 is going to keep that protection for homeowners and not touch homeowner taxes, but it will be asking for corporations to be paying market rate on property taxes.

I would say it’s the landscape is so different, not just for AAPI communities, but for all communities. We have so many things that have happened that have led to people of all races coming to this awakening of the issues in our country. We have, COVID-19 showing everyone in this country how we don’t have an infrastructure set up for disaster preparedness. We don’t have a safety net and in place for when our hospitals run out of supplies or when everyone loses their jobs and they’re not able to pay rent, we don’t have anything set in place for that. We’re also seeing a public cry for police reform and abolition coming from folks who are directly impacted by violence from police. And we’re seeing civil unrest in people. And we’re also seeing dramatic change in a really big direction. We’re seeing city councils voting to defund the police and to cut police budgets, to spend on schools and other programs are really beneficial for communities.

So I think in this moment, we’re seeing a lot of people realize the deep rooted structures in our society that aren’t serving us, aren’t, aren’t doing as good, but, and we’re also seeing hope. We’re seeing that when people rise up and they are engaged in whatever way, they want to be engaged, whether it’s voting, whether it’s through the streets, whether it’s calling their representatives, that leads to change. So I think to answer your question, we’re seeing both an obvious need for change. And we’re also seeing that when people fight back, we win change. There’s a lot of hope as well as the realization of the problem.

Definitely I am wholeheartedly onboard with that. I personally have learned in this whole process of this show is that it’s about listening. It’s about understanding where they’re coming from. How do we highlight those stories? And so I’m really excited for the show. And if you want to learn more about our organizations, go to www.projectbyproject.org

And to follow AAPI FORCE, please go to www.aapiforce-ef.org

You can also follow us on Facebook and Instagram, if you just search Project by Project San Francisco and AAPI FORCE. So if you’re really interested in our show and can’t wait to hear about the stories that we have to tell, share, follow our show, to stay updated on the weekly releases.